Workers cut a ribbon at the grand opening of the New Era Windows Cooperative.

This month, workers at the former Republic Windows and Doors factory in Chicago celebrated the opening of their own cooperatively-run business, now named New Era Windows Cooperative. As chronicled live via this blog and 2009 book Revolt on Goose Island by Kari Lyderson, Republic Windows and doors went bankrupt and was shut down suddenly in 2008 after many decades in operation.

The workers, who were fired without much notice and who were right to be suspicious about the owners’ activity, refused to leave and occupied the factory in protest, winning support from local labor groups and politicians, including Barack Obama. Refusing to leave the factory for six days, the action culminated in a $1.75 million settlement for the workers. A new green construction company, Serious Materials took control of the factory, and the workers seemed to have been vindicated. 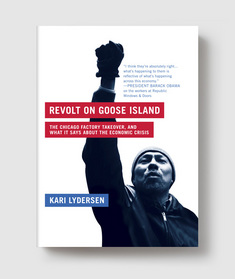 Since the publication of Revolt on Goose Island, Serious Materials ran into problems with their business plan and workers felt their profitable work was being wasted in a company they could not control. In the following years, the workers began a plan to form a cooperative worker-owned company by asking for help from  United Electrical Workers Union, The Working World, and the Center for Workplace Democracy. They also raised funds from the community. On the new cooperative company website, the workers explain the new name:

Today, we are putting that new cooperative business together, and we have decided to call it New Era, as we hope it will be an inspiration for how future jobs can be created in America. Everyone can participate in building the economy we all want, and no one should be treated as temporary or just raw material for someone else’s business.

Kari Lydersen wrote a report on the occasion of the factory opening for In These Times, describing her return to the factory in November 2012. She attended a meeting of workers, led by Armando Robles, who she wrote about in Revolt on Goose Island, discussing plans for the new cooperative. “The workers know launching and running a company won’t be easy,” she writes, “but given their deep knowledge of the industry and their personal investment in the project, they are confident they can do it.”