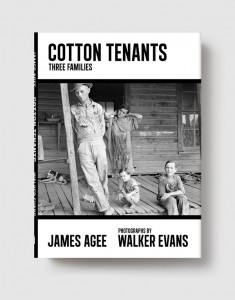 Read the story behind Cotton Tenants in The New York Times

He was only in Brooklyn for a few months, but while he was here in the winter of 1938 and spring of 1939, James Agee lived in Clinton Hill, at the top of the gabled brick row-house at 179 St. James Place.

Straight out of Harvard, Agee had joined Fortune as a staff writer in 1932, but was frustuated that he was only getting assignments that he felt were—according to his biographer Laurence Bergreen—“mind-numbing,” on subjects like butter, orchids, and colonial Williamsburg.

In 1936, he was picked by Fortune editors to to write a “sociological” article about tenant farmers in the south, and Agee felt this was his big break. But by 1938, two years after his research trip to Alabama with Walker Evans, his initial article for Fortune (now published by Melville House in book form as Cotton Tenants) had been rejected, and he was working on drafts of Now Let Us Praise Famous Men in New Jersey, where he was running out of money and living with his girlfriend Alma Mailman … and a pet goat.

His friend, Robert Fitzgerald, translator of The Odyssey and The Aeneid, remembers this time in his memoir The Third Kind of Knowledge:

I have found among his things a journal in which he noted on December 1st that when the rent was paid he would have $12.52 in the world and in the same breath went on with plans for his wedding to Alma later that month. In January or February Fortune came to the rescue with an assignment: the section on Brooklyn in an issue to be devoted to New York City. For the rest of the winter and spring they moved to a flat in St. James Place, taking the goat with them.

The assignment was to contribute a comprehensive survey of the borough of Brooklyn, and Agee found a place to stay to do his research through his writer friend and fellow Fortune writer Wilder Hobson, who offered to let Agee and Alma to live in his in-laws apartment at St. James Place in Clinton Hill for free (the trio of row houses were designed by architect William Tubby). But the magazine article that Agee came up with for this assignment—like what became Cotton Tenants—was also rejected by Fortune editors (it was later published in 1968 by Esquire, and is now a book published in 2005 called Brooklyn Is: Southeast of the Island: Travel Notes from Fordham University Press). The Clinton Hill trio of row-houses on St. James Place where James Agee lived for a few months at the end of 1938.

Agee’s vivid sketches of Brooklyn neighborhoods from Park Slope to Sheepshead Bay (“There seems almost no conceivable end to Brooklyn. It seems, on land as flat and huge as Kansas, horizon beyond horizon forever unfolded, an immeasurable proliferation of house on house and street by street”) would have been lost, had Fitzgerald not kept a copy:

In the living room or backyard of that place I heard several drafts of his prose on Brooklyn, and by some accident kept two drafts in a file. Twenty-four years later these turned out to be the only vestiges of this work in existence. In this case, too, Fortune found Jim’s article too strong to print, and it did not appear in the New York issue (June 1939).

By the end of their time in Brooklyn, Alma was pregnant, and Agee’s former marriage to Olivia “Via” Saunders was legally dissolved. Agee and Alma returned to Monk’s Farm in Stockton, New Jersey to get married. Three years later, they too would divorce, and only seven years later, in 1955, the hard-drinking and smoking Agee would die of a heart attack at the age of 45.

Melville House at the American Library Association Conference in Chicago