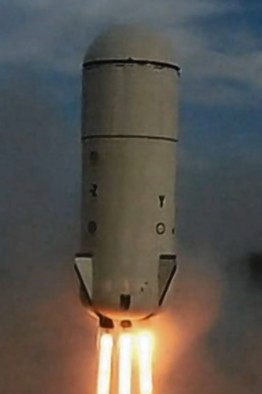 Jeff Bezos' rocket, just before it blew up

Okay, I resisted this one for several days because, well, hell, it was entirely too predictable for me to jump on it. But then nobody said anything about it, and so I’ve decided to step into the breach, because it’s my civic duty: No less than the Wall Street Journal has run a report questioning Jeff Bezo’s sanity.

Yes, it’s the Wall Street Journal, which generally defends gazillionaires as geniuses simply by virtue of their making money, but that only makes its oh-so-cautious approach that much more remarkable — and revealing: “Some of history’s greatest innovators have been among its most idiosyncratic,” writes WSJ reporter Stu Wood, “and Mr. Bezos shows signs of fitting that mold. He is the latest businessman to use his fortune to fund ambitious and what some might consider far-fetched plans.”

It goes on to cite Howard Hughes, Richard Branson, and Larry Ellison as examples — a weird list, but it plants the seed.  There’s nothing crazy about Branson and Ellison —  silly, maybe, but not crazy. They’re just rich guys who like to play in a big, macho way. God knows what that’s about — well, so do most of us — but it should be noted that they’re also guys who do some seriously good things with their money, and I’m talking actual and ambitious charitable programs, not the bullshit, penny-ante variety of Bezos, which are barely-funded p.r campaigns for suckers.

Howard Hughes, on the other hand — Howard Hughes was certifiably, uncontestably, incapacitatingly deranged for the last several decades of his life, and not necessarily playing with a full deck before that, as has been endlessly documented.

At which point the story goes on to detail Bezo’s patent application for an air bag for cell phones (“The protection system causes the device to be reoriented and deploys an air bag prior to contact such that the air bag first contacts the surface at impact.”) … his personal space program (spaceship #1 blew up “in an explosion ‘resembling the notorious 1986 Challenger disaster.'”) … and his project to build a 200-foot tall clock “deep inside a mountain on his West Texas property, not far from his rocket-launch site” with a “chime sequence that has been choreographed by musician Brian Eno.” The sequence, by the way, is set to mark not only the days and years and centuries — Bezos wants it programmed to go off 10 millennia from now.

Why? According to the WSJ report,

“The reason I’m doing it is that it is a symbol of long-term thinking, and the idea of long-term responsibility,” said Mr. Bezos, who has spent at least $42 million on the timekeeper. “We humans have become so technologically sophisticated that in certain ways we’re dangerous to ourselves. It’s going to be increasingly important over time for humanity to take a longer-term view of its future.”

This is the part where my wife needed smelling salts to revive me. The man who has said that books are “over” — books, our last chance against guys like Bezos — and who has done his damndest to make that happen, now says he’s just looking out for us because we’re “so technologically sophisticated that in certain ways we’re dangerous to ourselves.”

What’s this “we” business, kemosabe?