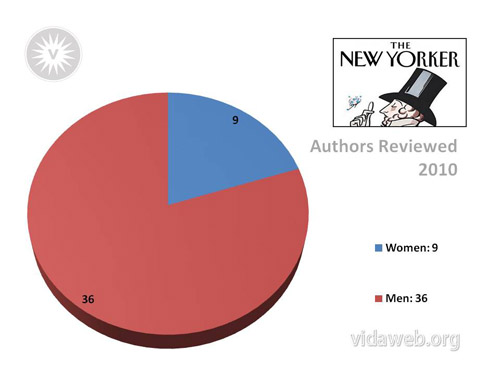 Via a story by Meghan O’Rourke at Slate yesterday, we learned about the persistent gender gap in articles written by or coverage of women in the nations magazines and literary journals. O’Rourke references a study commissioned by VIDA (the arts organization devoted to exploring and advocating for women) that analyzed the continued disparity in coverage between men and women.

Here’s the breakdown for just a few publications:

Combined ratio of reviews and book reviews: 154 Men to 55 women

The New York Review of Books

So why the disparity?  O’Rourke suggests that “It may be that more men than women write what editors consider ‘important’ books—in part (and this is speculation) because more men than women write about international affairs and politics.” She also suggests that the idea of what is “important” may also be fraught with certain gender biases that we don’t yet understand.

Still, there’s the question of fiction. Of all the writers on bestseller lists, aren’t women well represented here? I’ll leave O’Rourke with the last word.

The world of novels, we often hear, is a feminine one—book buyers are predominantly women; novels and memoirs by women and about women’s lives often do extremely well commercially. (Think of Eat, Pray, Love and The Lovely Bones.) So you might shrug and say—what’s the problem? But VIDA’s study raises questions about how seriously women writers are taken and how viable it is for them to make a living at writing. As we all know, small rewards and affirmations have a concrete but unquantifiable effect on one’s writing life. So does silence.

Binders for your women -- reviewed

Brigid Brophy: space in the minivan?

Women's and workers' libraries under threat