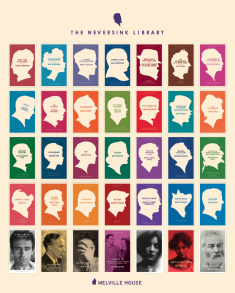 The Neversink Library champions books from around the world that have been overlooked, under appreciated, looked askance at, or foolishly ignored.

The Train by Georges Simenon

The Book of Khalid by Ameen Rihani

I Await the Devil’s Coming by Mary MacLane

My Autobiography by Charlie Chaplin

Tirra Lirra by the River by Jessica Anderson

The Graveyard by Marek Hlasko

Reasons of State by Alejo Carpentier

The Letters of James Agee to Father Flye by James Agee

The Right Way to do Wrong by Harry Houdini

The Polyglots by William Gerhardie

The Reverberator by Henry James

College of One by Sheilah Graham

The Oasis by Mary McCarthy

The Autobiography of a Super-Tramp by W.H. Davies

The Devil in the Flesh by Raymond Radiguet

The President by Georges Simenon